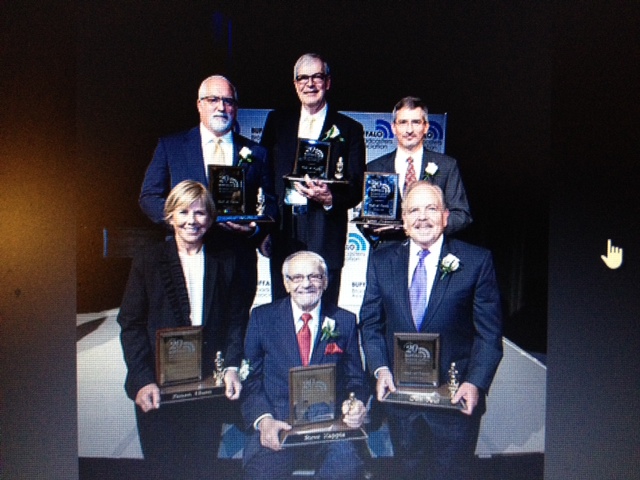 CLARENCE, NY ( wbbz.tv) The Buffalo Broadcasters Association inducted the BUFFALO BROADCASTING HALL OF FAME class of 2016 this past September 29th at the WNED-TV studios dowtown. Now, everyone can enjoy the biggest night of the year for the men and women in radio and television when WBBZ-TV, Your Hometown MeTV Station, airs the “Hall of Fame” Ceremony in a special presentation Wednesday night December 28th at 8:30p.m.

Buffalo Broadcast Hall of Fame inductee, and owner of WBBZ-TV Phil Arno commented, “We are honored to be able to air this presentation.  WBBZ-TV is truly a local station, with a commitment to deliver quality local broadcasting. The men and women honored in the 2016 share that commitment, and we congratulate them.”

In addition to the induction ceremony, the BBA honored WBTA RADIO in BATAVIA for its 75th Anniversary. The TIM RUSSERT MEDAL OF MERIT was awarded to STEPHANIE APONTE a journalism student at CANISIUS COLLEGE.

“The Class of 2016 inductees represent so many different aspects of broadcasting,” BUFFALO BROADCASTERS ASSOCIATION Pres. HEIDI RAPHAEL said. “We are honored to recognize and welcome them into the HALL OF FAME.”