WBBZ-TV is Your Hometown MeTV Station!  We thank you for watching, and coming online for an unique local media experience.  Here is some background on WBBZ-TV and it’s owner, WNY native Phil Arno (Code 3 Broadcasting, LLC).

Phil took ownership of WBBZ-TV in September of 2010 after acquiring the license for what used to be WNGS-TV.  On August 1, 2011 at 5:00am, he changed the call letters to WBBZ to represent a “buzz” in Buffalo broadcasting, while acquiring the rights to air the MeTV network of classic television programming, putting THIS TV and their lineup of classic movies on digital subchannel 67.2.

Phil Arno, the owner of WBBZ-TV thanked the Buffalo Broadcasters, judges, and the Western New York community for the distinctive honor as “Trailblazer of the Year.”  The award was presented to Phil at the 2nd annual BEMA Awards held Friday April 26th 2013 at Salvatore’s Italian Gardens.  In 2015, Phil was inducted into the Buffalo Broadcasters Hall of Fame.

In March of 2012, Phil named Bob Koshinski Vice President and General Manager.  Bob was the former head of the Empire Sports Network, and before that was sports director for WKBW-TV.  Bob has left WBBZ-TV to develop WNY Hockey Magazine, AllSportsWNY.com, and his consulting company.

In February 2015, Arno named Chris Musial Vice President and General Manager.  Musial is a member of the Buffalo Broadcast and New York State Broadcasters Hall of Fame.  He was formerly VP and GM of WIVB & WNLO-TV in Buffalo, where he worked for decades first in news, then as General Manager.

In July of 2012, Phil opened a new studio and office facility inside the Eastern Hills Mall in Clarence, New York launching local programming with a community celebration called “Buffalo Night In America!”, the live three-hour broadcast event featured in studio elements, remote live video of the live performances and vendors, plus live streams from across the USA of via Ustream from relocated Buffalonians. 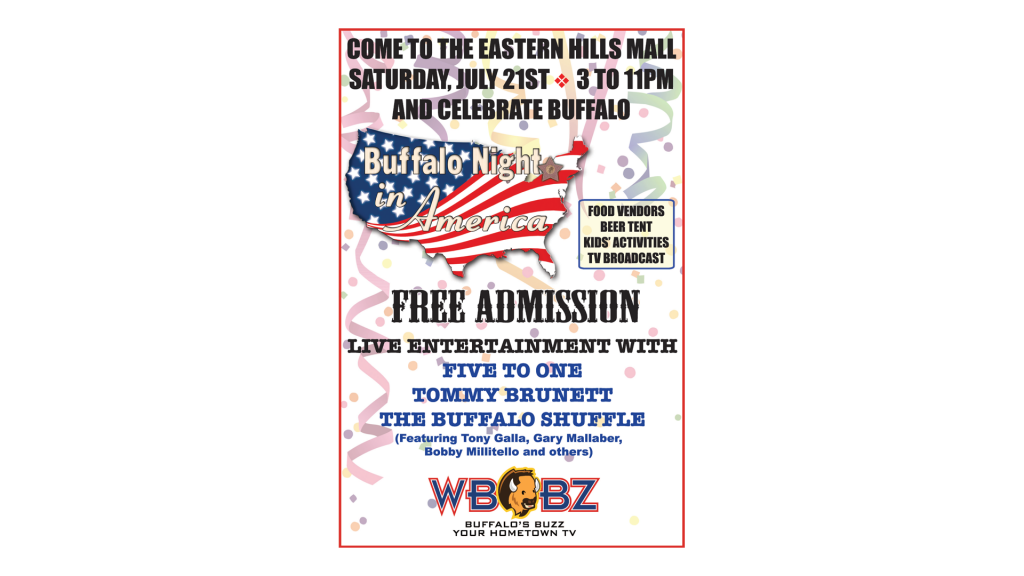 “The Big Picture” with Penny Wolfgang airs Sundays at 10:30am and 7:30pm, tackling topics that impact Western New York and the world from all angles in order to get the “big picture”. This program debuted in 2018 with Phil Arno at the anchor desk.

“Beat The Champ” is WNY’s only TV bowling show, with hosts Paul Peck and Hall of Fame Bowler Sue Nawojski Saturday at 4pm.  Once a mainstay with late sportscasters Van Miller and Chuck Healy, “Beat The Champ” showcases area bowlers in a competition of skill.  Players of all ages are welcome to qualify and play. This program debuted in 2016.

“The Karyn Reece Show” features popular psychic medium Karyn Reece with guests in studio and SKYPE, presented before a live studio audience that are also offered ‘readings’ to make a connection.  This program debuted in 2019.  Karyn was involved in two other similar shows in 2014 and 2017. The show airs Fridays at 8pm.

“Passionate Living” is a half hour  show that inspires viewers to fall in love with their lives. Everyone can lead a more passionate life as it requires no additional income, just a commitment to embrace and explore the joys of life that surround us. Host Cat Miller will explore inspiring topics like the art of the perfect picnic, an ultimate day of adventure with friends and more profound ways to celebrate love in our lives. Meet inspiring individuals who have stepped through fears to live their dreams and used their passions to make a difference in the world. Join your hometown WBBZ-TV family Tuesdays and Thursdays at 8pm and Sundays at 11am.

The long running locally produced and nationally syndicated “Off Beat Cinema” show moved to the station in August 2012 from a Buffalo network affiliate, where it can be seen every Saturday night at midnight.  This program first aired in 1993.

“The Fred Jackson Show” debuted in 2012 with a live studio audience and members of the team to recap and discuss how the recent game went.  Plus questions from the audience and the opportunity to have an item signed by Fred and his guest. The show continued after Jackson left the team, with the “Robert Woods Show”.

In May of 2013, WBBZ-TV partnered with the Buffalo History Museum for their presentation of “Giants of Buffalo: Radio” featuring legendary talent Dan Neaverth, Sandy Beach, Joey Reynolds, Shane Gibson, and Stan Roberts.  The station continues to support the Museum and their “Giants” series, which has included special programs with legendary anchors Irv Weinstein, Rick Azar, and Tom Jolls along with other hometown notables.

For two seasons starting in September 2013, WBBZ-TV partnered with The Buffalo News to present “The Bucky and Sully Show” every Monday and Friday night LIVE at 6:30pm, with an encore presentation Sunday at 11:30am.  Buffalo News Sports Columnists Bucky Gleason and Jerry Sullivan offered commentary, analysis and arguments about our hometown teams.

For two seasons starting in the fall of 2013, WBBZ-TV aired ACC College football and basketball. In the summers of 2012 and 2013, WBBZ-TV carried New York Yankees broadcast games. 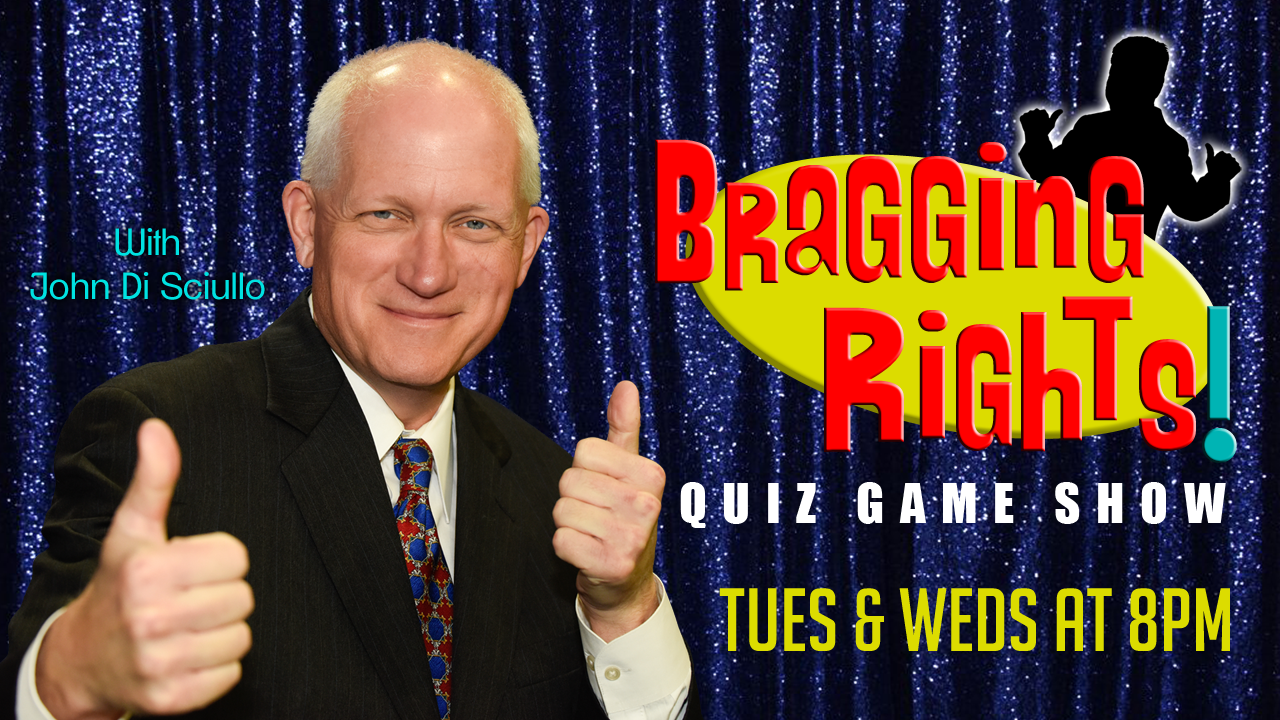 “Bragging Rights” is the WBBZ-TV community game show featuring hometown teams who take the trivia challenge to play for fun prizes, and promote their organization.  This program began in 2014.

The production department of WBBZ-TV is staffed with an award winning team of videographers, editors, writers, and producers.  Production includes field work with multi-camera set ups, commercial production for presentations and on-air servicing hundreds of clients annually, 4K drone footage, and in studio work with one of the largest green screens in New York State at our Eastern Hills facility.

The station has been recognized by the New York State Broadcasters with statewide awards for programs like “The Healthy Zone Game Show.”  This was produced in cooperation with Blue Cross, Blue Shield and featured third grade students from the Buffalo Public Schools competing in a game of trivia (produced in 2015).

Other NYS Broadcaster Awards have been given to “Beat The Champ” for best sports coverage, and programs that featured community organizations profiled with the Association of Fundraising Professionals organization.

The station has developed strategically based projects with several not-for-profit agencies in Western New York that include call to action spots, video presentations, assistance in producing their events, and recording those events for future broadcast.  Those groups include Mercy Flight, Buffalo Hearing and Speech, Saving Grace Ministries, and the Variety Club of Buffalo.

Production clients in studio and on remote include Aesthetic Associates Center, the Law Firm of Jed Dietrich, and The Buffalo Sports Hall of Fame.

WBBZ-TV is committed to the Western New York community, promoting the annual Taste of Buffalo; Erie County Fair; Canalfest of the Tonawandas; and dozens of other events that make life in our hometown great.  WBBZ-TV has a promotional footprint at these community events, and offers station talent to host galas and shows that support a diverse group of organizations including Buffalo State College, Make-A-Wish, Juneteenth Festival, and many more.

In 2015 the Buffalo Broadcasters Association inducted Phil Arno in the 2015 Hall of Fame. Noting it is not just the work Phil and the WBBZ-TV team have put into creating a new independent station – it is Phil’s personal journey that makes this honor so worthy.

Phil Arno started his career at WKBW radio with the late Jeff Kaye in the 1970′s, then moved to television where legendary anchorman Irv Weinstein gave Phil a camera and told him to start shooting film for “Eyewitness News.”  Soon, Phil would move to WIVB-TV 4 after a brief run as a director at WUTV when it signed on the air.  Phil’s work as a news photographer in the 70′s and 80′s earned him the respect of the Western New York broadcast community before he decided to pursue a dream.

Growing up in North Buffalo, as a graduate of both Canisius High School and College, Phil always had a dream to create television.  Watching the greats in black and white gave him the inspiration to write and create, which is what drew him to head west.

While in Los Angeles, Phil pitched projects as varied as sitcoms to storylines for “Star Trek,” but it was his expertise in news that ultimately became his destiny.  Phil became one of the first chopper videographer pilots.  His video of the infamous white Bronco car chase with O.J. Simpson was broadcast around the globe.  Phil covered earthquakes, crime, and the violence that erupted there after the Rodney King beating.

In 2000, Phil was shooting the Academy Awards for a local station when the helicopter he was flying in crashed.  Phil’s injuries were life threatening.  The crash would impact his life forever.

As Phil describes it, his perspectives on things changed.  He and his wife Mary had just welcomed their twin boys into the world, Warren and Joe.  They were both just one when the crash almost claimed the life of their father.  After years of rehabilitation and recovery, Phil decided to take a settlement he had received and bring his family back to Western New York.  While Mary was originally from New Orleans, she quickly made Phil’s hometown her hometown.

Instead of simply retiring, Phil decided to pursue the license of an independent television station based out of Springville, NY that had gone dark after Equity broadcasting closed up shop.  With long hours, personal investment, and building a team of local professionals – Phil Arno took a low power station and has transformed it into Western New York’s Hometown Television Station, WBBZ-TV, with full coverage on Cable ( Channel 5 ) or other channels depending on your area; FiOS Ch. 5; Dish Ch. 5; and DirecTV 67.

Phil’s journey to blaze trails continues with his wife Mary, their daughter Anna, and twin sons Joe and Warren.  He, and the entire WBBZ-TV team, thank you for being a part of our journey; watching our station; and supporting our advertisers and programming.