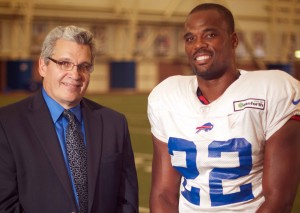 WBBZ-TV, Your Hometown Station, is proud to introduce “The Fred Jackson Show” to the local program roster beginning Monday September 10th LIVE at 6:30p.m.  Fred, star running back for the Buffalo Bills, has been a member of the team since 2007.  The program

will be re-broadcast Monday evening at 10:30p.m., and Tuesday morning at 9a.m. “The Fred Jackson Show” is sponsored by Sahlem’s Roofing and Siding.

On having his own show, Fred Jackson said, “I’m pretty excited.  I think it will be fun to get into the living rooms of Buffalo Bills fans, let them see the different characters we have on this team, and show them what kind of character I am.  I think it will be a lot of fun, stay tuned!”

Fred Jackson became the first player in NFL history to rush for more than 1,000 yards and total more than 1,000 kickoff return yards in the same season in 2009.  Fred was chosen as the 2010 winner of the Buffalo Bills/NFL Walter Payton “Man Of The Year” award, as voted on by selected members of the WNY community.  The award was given to Fred for a combination of his excellent play on-the-field, and his contributions to the community.

WBBZ-TV Vice President and General Manager Bob Koshinski will co-host with Fred, welcoming guest players with a live studio audience of football fans, and area high school teams to the Eastern Hills Mall studio.   Koshinski commented, “I am very excited to be part of the Fred Jackson Show. Having had the great experience of co-hosting both the Jim Kelly and Thurman Thomas Shows during the Bills Super Bowl years, it will be great to return to that format with one of the top players in the NFL, Fred Jackson.”

WBBZ-TV owner Phil Arno welcomed the star player, stating, “Having Fred Jackson join our lineup of local shows indicates the continued commitment of our station to develop hometown programming for our hometown audience.  We are proud to be the broadcast home of the NFL Network game when the Buffalo Bills take on the Miami Dolphins November 15th at Ralph Wilson Stadium.  Having the Jackson show compliments the coverage of our hometown team.”

Jackson is a native of Fort Worth, Texas; a graduate of Coe College; married with three children.