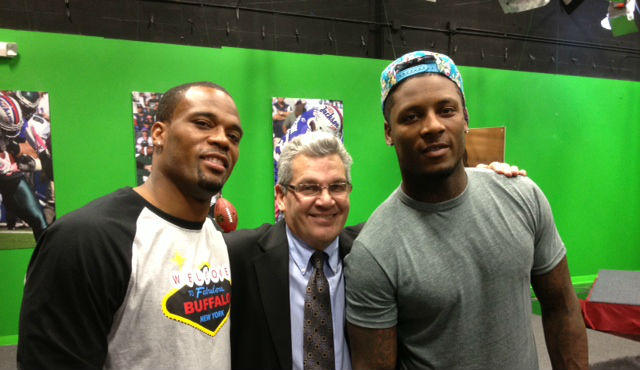 It was an electric night at the WBBZ-TV studio Monday when Bills RB Fred Jackson and co-host Bob Koshinski welcomed WR Stevie Johnson to "The Fred Jackson Show!"

Fred and Stevie talked about how the Bills were able to "Jolt The Jets" Sunday in the big win at the Ralph. Plus, a full house in studio were able to meet their favorite players after the LIVE show. Brad Gelber read "tweets" and Facebook questions during the show – which has an encore presentation Monday night at 11p.m. and Tuesday morning at 9a.m. on WBBZ-TV – Ch 67.1; TWCable 5; FiOS 5; Dish 5; DirecTV 67. If you would like tickets to an upcoming show, just go to www.wbbz.tv and click "tickets!"The Buffalo Bills put together their best performance on both sides of the ball and buried the New York Jets 37-14 Sunday at Ralph Wilson Stadium.

If you would like tickets to see the show LIVE in studio, click TICKETS at the top of the web page.

The WBBZ-TV studio is located next to Macy's inside the Eastern Hills Mall.  "The Fred Jackson Show" follows the "Bucky & Sully Show" LIVE at 7p.m., and if you arrive early enough, you can watch both shows.

Two lucky members of our studio audience will compete for prizes from Dave and Busters gaming restaurant at the mall, and a "Fred-EX" t-shirt from Poster Art.

"The Fred Jackson Show" is co-sponsored by D'Youville College and Gates Circle Wine and Liquor.  Encore presentations of the show can be seen Monday at 11pm and Tuesday morning at 9a.m. on WBBZ-TV, Ch 67.1; TWCable 5; Dish 5; FiOS 5; DirecTV 67.