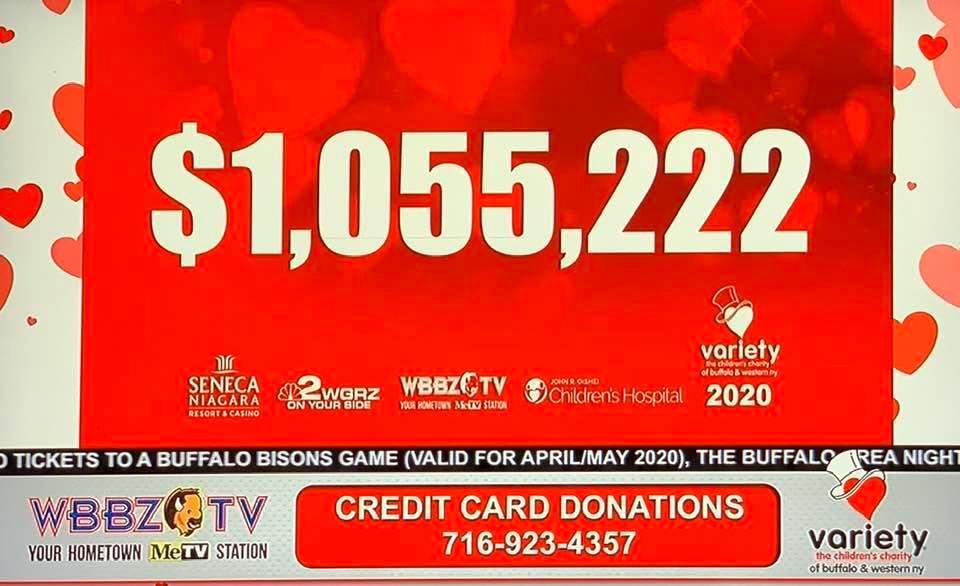 Now you can relieve all of the highlights in a special presentation available on our YouTube Channel.  You can make a donation by going to VarietyBuffalo.org or by texting the word VARIETY to 2022 for a donation of $20.

Lancaster, NY (www.varietybuffalo.org) Thank you to Buffalo and all of Western New York for your support of the Variety Kids Telethon, raising $1,055,222 for the Variety Club of Buffalo Tent #7, supporting Oishei Children’s Hospital, and other Children’s charities. The 58th annual telethon event aired Saturday, February 29, 2020 on WGRZ-TV Channel 2  the NBC affiliate in Buffalo from 6p.m. until 11p.m.; and again Sunday, March 1, 2020 from 10a.m. until 9p.m. on WBBZ-TV, the locally owned MeTV affiliate broadcast on Channel 67.1 on-air; Cable 5 LIVE from the Events Center at the Seneca Niagara Resort and Casino in Niagara Falls, New York.

The Channel 2 on-air personalities on Saturday, and WBBZ-TV personalities on Sunday, joined attorney Paul Cambria, Vice President of Variety, with Darius Pridgen, President of the Buffalo Common Council and Bishop of the True Bethel Baptist Church, in hosting the event.  The Saturday show kicked off with a LIVE performance from Buffalo’s own Goo Goo Dolls with Johnny Rzeznik and Robby Takac.  They were once again a part of the show, performing with their full band. Johnny and Robby answered phones, helped promote credit card premiums and made personal donations.

Sunday’s lineup was filled with current and past celebrity children, polka and local bands, choirs, plus live entertainment from WNY native Shawn McQuiller of “Kool & The Gang.”  Both the Saturday and Sunday telecasts were capped off with a tribute to Veterans with a special appearance from United States Army Staff Sgt. David Bellavia, who recently was awarded the Medal of Honor from Western New York.  We were truly honored to have Staff Sgt. Bellavia join us in collaboration with the Color Guard from American Legion Post #735 of West Seneca for a patriotic presentation.

Throughout the 16 hours of the Telethon, various corporate matches and donations were made from so many incredible members of our Buffalo and WNY community, coming together for our kids.

“The 58th Variety Telethon was a success due to the cumulative efforts of Western New Yorkers that contributed time, talent and money to help the Children of our community. On behalf of the children we serve Thank You!  To ensure we can help all our Variety kids please honor your pledge.  Donations can still be made online at varietybuffalo.org or by texting “Variety” to 20222.” Said, Diane Kuciel, President of Variety.

All the monies raised stay local and help support the John R. Oishei Children’s Hospital as well as other local charities that benefit children.  For more information please visit varietybuffalo.org!

“I am pleased that we moved to WGRZ-Channel 2 and WBBZ- Channel 5.  Thank you to Oishei Children’s hospital for their support and assistance.  And, of course thank you to the people of Buffalo and Western New York for topping last year’s total!” said, Paul Cambria, Vice President of Variety.

The Variety Club of Buffalo thanks WGRZ-TV Channel 2 General Manager Jim Toellner and his team, WBBZ-TV owner Phil Arno and his team, Admiral Video, The staff and production team of the Seneca Niagara Events Center, Andrew Bennett and the Oishei Children’s Hospital Foundation, the Variety Club Board, Volunteers, and everyone who contributed their time, talent, and energy.

The Variety Club thanks our other media partners, notably longtime supporters Ted Shredd and Tom Ragan from 103.3FM; with appearances from Clay Moden of WYRK Country 106.5FM; Dave Jickster from 97 Rock; Ron Dombrowski from WXRL; and assistance from Tim Wenger of WBEN.

Please login to join discussion
No Result
View All Result