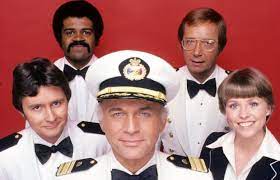 Watch as the crew from “The Love Boat” set sail every Sunday at 5pm on WBBZ-TV, Your Hometown MeTV Station.

WBBZ-TV is proud to announce the return of this classic show to our lineup!

The Love Boat is an American romantic comedy/drama television series that aired on ABC from 1977 to 1986; in addition, four three-hour specials aired in 1986, 1987, and 1990. The series was set on the luxury passenger cruise ship MS Pacific Princess, and revolved around the ship’s captain Merrill Stubing (played by Gavin MacLeod) and a handful of its crew, with passengers played by guest actors for each episode, having romantic and humorous adventures. The ship’s regular ports of call were Puerto Vallarta, Acapulco and Mazatlán. The series was part of ABC’s popular Saturday-night lineup of the time, which also included Fantasy Island until 1984.

The original 1976 made-for-TV movie on which the show was based (also titled The Love Boat) was itself based on the nonfiction book The Love Boats by Jeraldine Saunders, a real-life cruise director for a passenger cruise-ship line. Saunders was also partly inspired by the German cruise ship MV Aurora. The TV movie was followed by two more (titled The Love Boat II and The New Love Boat), all of which aired before the series began in September 1977.

The executive producer for the series was Aaron Spelling, who produced several television series for Four Star Television and ABC from the 1960s into the 1990s.

In 1987, the episode with segment titles “Hidden Treasure”, “Picture from the Past”, and “Ace’s Salary” (Season 9, Episode 3) was ranked No. 82 on TV Guide‘s 100 Greatest Episodes of All Time list. Another made-for-TV movie, titled The Love Boat: A Valentine Voyage, starring four of the original cast members, aired in February 1990.